The seventeenth century had some amazing art, and it’s no wonder that some of that brilliant art continues to inspire artists in our day. Paul Workman is a perfect example of this, for he is an artist who, inspired by the likes of major portraitists such as Peter Lely, makes his own interpretations of historical portraits. Mr Workman has painted portraits of Early Modern persons such as Thomas Tallis, Queen Elizabeth I, King Henry VIII, and William Byrd, to name but a few. I recently had the pleasure of conducting an interview with Mr Workman about his work, and I’m pleased to share it with you now. TSCL: What is it about the portraiture of the seventeenth century that so inspires you?

Mr Workman: I find I have an emotional response to English (British) painting, particularly portraits, of the 16th and 17th centuries. The way these paintings appear is unique, nowhere else did painters produce artwork in the same way. I admire the semi ‘flat’ appearance of many of the paintings and I believe that they reflect the essence of our national makeup. Curiously many of the paintings were created by artists from elsewhere but to me, they seem to have recognised and ‘tapped’ into the psyche.

TSCL: I’m always interested in what artists What kind of paints do you use?

Mr Workman: Acrylics. I can’t get on with oils. Acrylics suit my methods of painting. 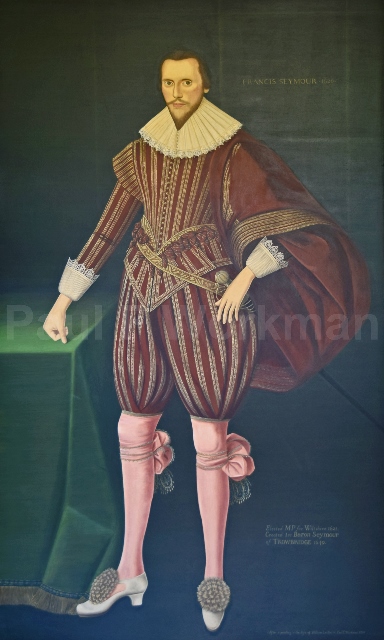 TSCL: In 2014, you painted Francis Seymour, 1st Baron Seymour of Trowbridge. As he is a lesser-known historical figure, was there something in particular that sparked your artistic interest?

Mr Workman: After visiting an exhibition of fantastic full-length portraits by William Larkin at the Holburne Museum of Art in Bath, I discovered that the artist had portrayed Francis Seymour, 1st baron Trowbridge. As I live near Trowbridge (Wiltshire) this provided me with an opportunity to recreate the portrait to bring back to the town. The original hangs at Petworth House in Sussex.

TSCL: How long does it take you to complete a portrait?

Mr Workman: My approach to painting is meticulous so, depending on size and detail, it can take quite a while.

Publicity photo from the 1996 BBC series The Fortunes and Misfortunes of Moll Flanders, starring Alex Kingston and Daniel Craig.

TSCL: Stuart-era writer, Daniel Defoe, wrote Moll Flanders (published in 1722) and which is set in the seventeenth century. There have been several film adaptations of this, with various talented actresses. You chose to depict Alex Kingston, who played Moll Flanders in the 1996 BBC production. Was there something about her performance that resonated with you more than the others had?

Mr Workman: The portrait of Moll Flanders was commissioned by a gentleman who owns a property which was used as a location for the film, it gave me a chance to emulate an artist hero of mine, Sir Peter Lely. Sadly I didn’t get to meet Alex Kingston.

Workman has also done a portrait of Prince Rupert of the Rhine.

TSCL: You lived in Ludlow, Shropshire, and painted the castle. I live twenty minutes from this historic town, and I’m utterly charmed by how it still retains many listed buildings and visitors do get a great sense of what it must have been like in the past. Does local history play an important role in what you choose to paint?

Mr Workman: To me, English history is a tapestry, full of extraordinary stories and legends. In the late nineteen nineties, I learned that 2001 would be the 500th anniversary of the arrival in Ludlow of Prince Arthur and Catherine of Aragon. I felt this warranted a visual record. The painting is owned by the Estate of the Earl of Powis and hangs in the gatehouse of Ludlow Castle. I am currently working on paintings directly influenced by episodes from the history of my present locality of Wiltshire. 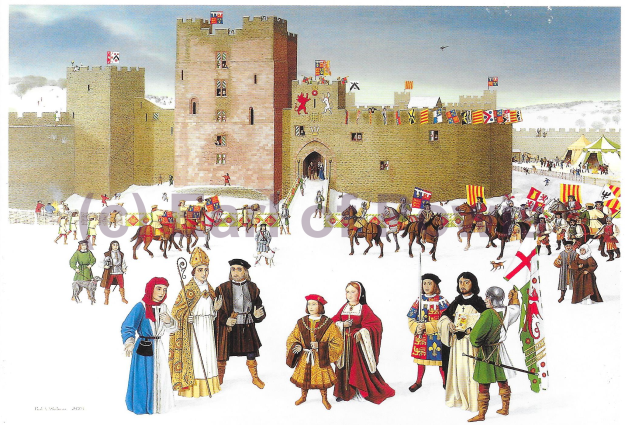 TSCL: For those readers who would like to begin to do their own historically-inspired painting, what advice would you give them?

Mr Workman: To look and look and look again at the subject you are wanting to recreate, whether in reproductions or the actual work. For instance, I visited Petworth House to view the original painting of Francis Seymour to take notes regarding colours and textures. I pour over reproductions of pictures I am interested in so that gradually I absorb the overall impressions I would like to reproduce.

Hear ye! One thought — so far — on “Inspired by the 17th-century: An Interview with Paul Workman, Artist”: