I hope you all enjoyed our first selection for the 17th-Century Book Club, which was William Wycherley’s play, The Country Wife!

This was the second time I read the play, and I wish I could have performed in it. I would like to apologise to you all for not having the forum up-and-running as I said I would, but we (Gavin and I) are still working on it (mainly him) in order to make it really nice and usable for us! I’m sure you’re lovely and will be fine with this. Anyway, back to the play! The Country Wife was written by William Wycherley in 1675. Wycherley himself was born in England in 1640/1. It was considered so rude that it wasn’t performed from the 18th-century until the 20th-century!

It is interesting to note that the play was originally performed by a few of the most famous of Restoration players. Charles Hart performed Mr Horner and Ned Kynaston portrayed Mr Harcourt. 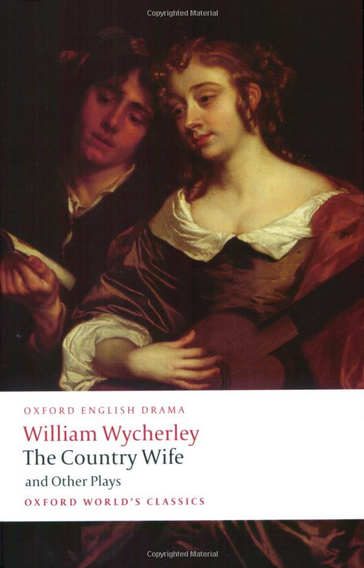 Ernest Thesiger at the Old Vic in image via Nicola Hunt’s Pinterest.

The play begins in London, between a Quack and one Mr Horner. Mr Horner has instructed the Quack to spread rumours all around town that he is useless as a man – a eunuch/impotent – bitter and hateful about women, that he wants nothing to do with them. This is of course a lie he’s concocted in order to make access to virgins and wives easy, and therefore, he can have as many clandestine affairs as he chooses. The reasoning is if men think he is no danger to their womenfolk, no one will suspect him.

“Your women of honour, as you call ’em, are only chary of their reputations, not their persons, and ’tis scandal they would avoid, not men” – Horner

This is a bawdy tale, and was considered lewd in its day, though it was nevertheless popular (this was, after all during the reign of the Merry Monarch, Charles II). Maggie Smith in a 1969 production of The Country Wife. Image via Gerberatte.

Horner sets about seducing as many women as possible, and succeeds, but Harcourt has a much more noble plot and he falls in love with Alithea.

So who is The Country Wife? That would be Margery Pinchwife, the young, innocent country wife of Mr Pinchwife.

Most of the women in the story have irritating husbands whom they enjoy cuckolding with Horner. Though Horner is using them for sex and his entertainment, do the women not also use him to get back at their husbands?

It’s a fun, farcical romp, and I really enjoyed it. Horner presumably continues his life as a libertine, and so we never get a ‘reformed rake’ out of him, which was refreshing. What about you – what were your favourite parts? Quotes? Please join in the comments below!

Our next selection in our book club is: Moll Flanders by Daniel Defoe! Please read it by Saturday 5th July, 2014 and we’ll discuss it Saturday evening.

Hear ye! One thought — so far — on “The Country Wife by William Wycherley”: